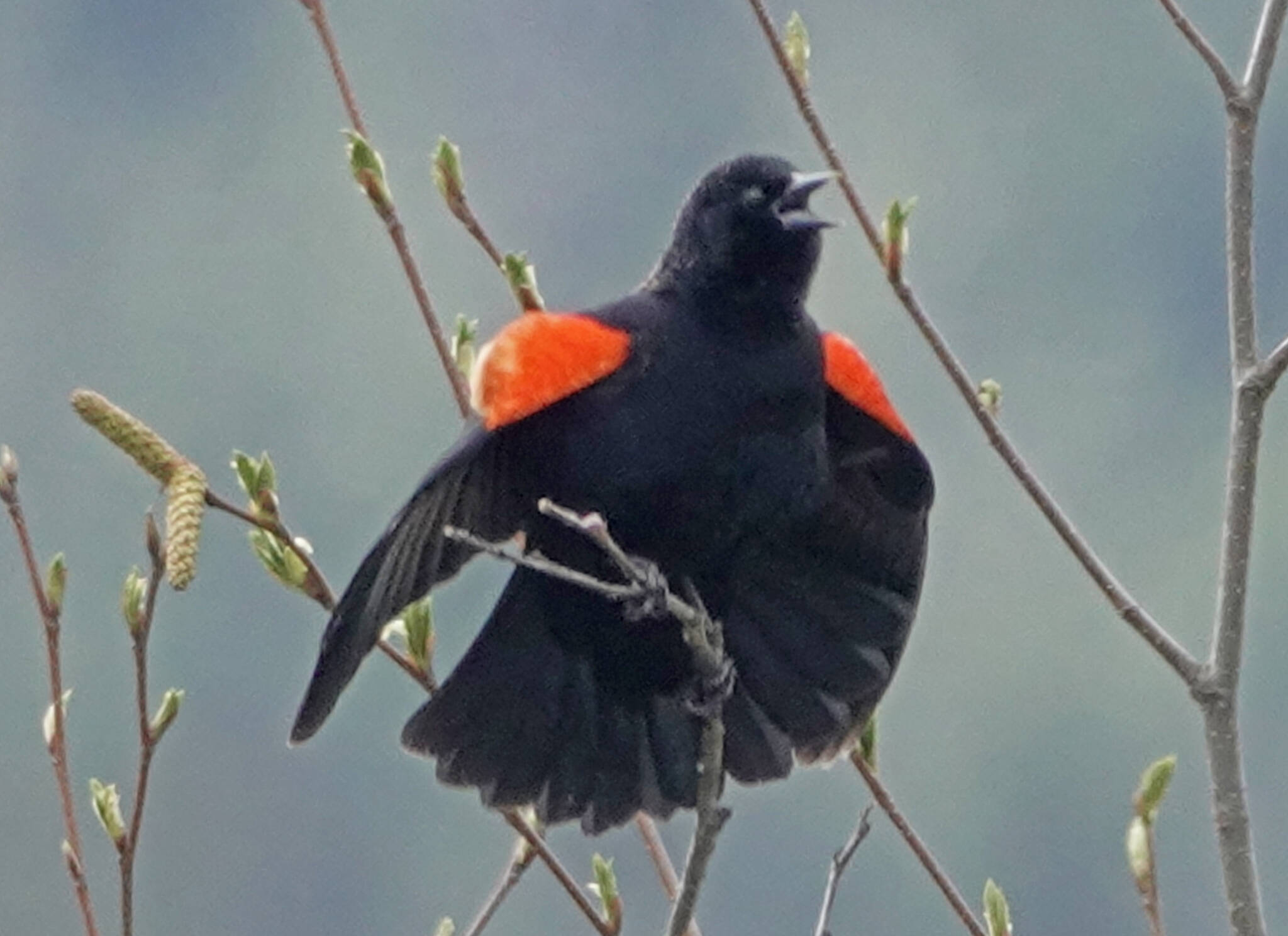 Red-wings are found all over North America, barring the very far north and some patches of unlivable habitat. They are here in Juneau, too; two easy places to see them are Kingfisher Pond in the Lemon Creek area and the Duck Creek Greenway near Nancy Street in the Valley. I’ve had fun this spring, hanging out near these little wetlands and watching their behavior. And they used to nest in the wet meadow area between Sunny Point and Fred’s, but I haven’t seen them there for years.

My ties to Red-wings go back decades, to the beginning of my career, which began in the marshes of eastern Washington, where I studied yellow-headed blackbirds that nested in the same marshes as red-wings. The two species are interspecifically territorial, defending territory borders against each other as well as against members of their own species. Both species are often polygynous; a male’s territory commonly included the sub-territories of several females.

Red-wing males are fiercely territorial, defending their space by singing and displaying their showy red epaulets, flying from perch to perch to cover all their borders. A really intense confrontation between two males involves perching next to each other, standing upright and very sleek, pointing their bills to the skies. Males after their first winter are often called first-year males; their plumage is not fully black but some of the back and chest feathers have brownish edges. In addition, their epaulets are not as intensively red as those of full adults. First-year males are capable of breeding and sometimes invade the territories of adults or attempt to set up territories of their own, but they are usually subordinate to full adults. They mature fully by the second year and then can hold their own quite well. Incidentally, those ‘epaulets’ appear to be on the shoulder (hence the name) when the wing is folded, but they are not close to the shoulder joint—they are really closer to the wrist joint.

Females hold sub-territories within a male’s territory and defend their borders against other females. They choose where to settle using many kinds of clues, including especially habitat quality, but also characteristics of the males, and perhaps an assessment of space-available on a male’s territory. In some cases, a preference for unmated males occurs, but it is commonly overcome by the other considerations. Although it is common for a male’s harem to have three or four females, the record number seems to be 15 females on the territory of one male. As is true for many other songbirds, it is not uncommon for a nest to harbor chicks with two or even more fathers, the result of so-called extra-pair sexual activity.

Females build the nest, usually suspended from wetland vegetation, and do the incubating of eggs. Males help feed their chicks in some populations but not in others. So far, I haven’t seen the males at Kingfisher Pond attend to active nests at all.

Red-wings generally prefer to nest in wetlands, although they sometimes use agricultural fields and other upland habitats. They eat various insects and even seeds in the breeding season. Their favorite foods include dragonflies and damselflies, which are particularly vulnerable to capture at a time of transition between aquatic living of larvae (called naiads) and aerial living of the adults. The aquatic naiads crawl up on the wetland vegetation, split open the exoskeleton, and emerge as adults; this usually takes several hours, at least. Furthermore, initially those new adults (called tenerals) are soft-bodied and their wings need some time to expand and harden so the adult can fly. And that’s when the blackbirds can nab them easily.

Red-wings are feisty birds, ready to defend their holdings against intruders and potential predators.

This they do by screaming, making diving attacks, chasing, and even physically attacking. They chase crows and ravens, hawks and even eagles.

Red-winged Blackbird behavior at their nesting site.wmv from Bob Armstrong on Vimeo.

One drizzly day, I wore a black rain jacket when I went to see what was happening at Kingfisher

Pond. The male redwing whose territory includes the platform and adjacent sedges went crazy. He made the check notes of annoyance and the whistle-like call of alarm for many minutes and swooped low just over my head several times. He’d never done this on earlier visits (sans black jacket), so I conclude, provisionally, that he really did NOT like my black jacket. Perhaps I reminded him of crows and ravens, potential predators who would be chased if they got that close.