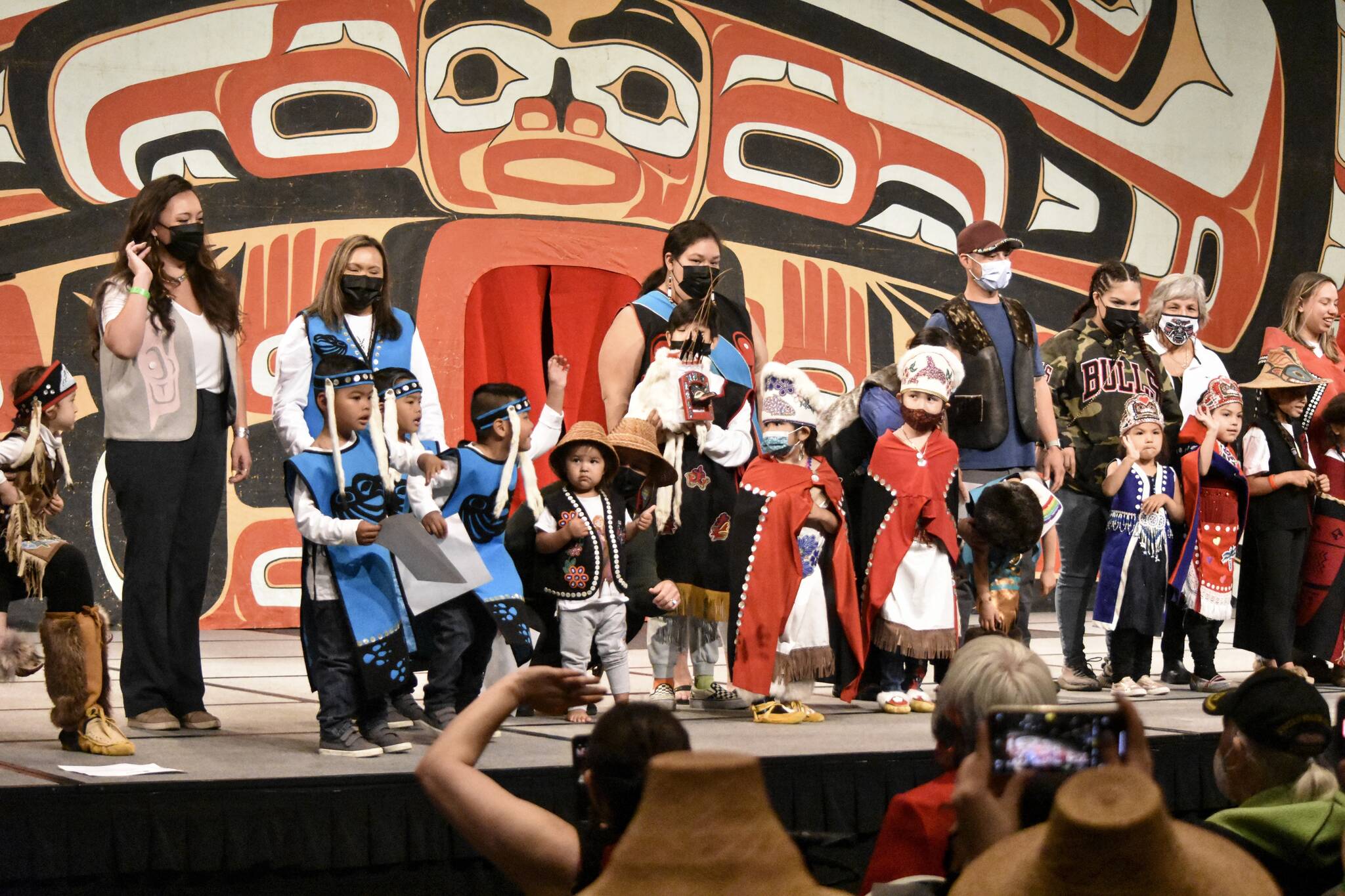 Children aged 2-5 were center stage at Centennial Hall Friday afternoon for Celebration 2022’s most adorable event: the toddler regalia review. Kids made their way across the stage — some needing a guiding hand from the parents, others with a clear future in show business — wearing regalia made by friends and family members.

Children were escorted across the stage individually or as small groups of family members — siblings and cousins — while a description of their regalia and who made it was read to the crowd. Some of the kids were clearly a bit shy about the whole ordeal, but others seemed to take to it, finding that things like twirling and waving elicited cheers from the crowd.

Two-year-old Evelyn Brown was the first out, wearing a tunic made with three different shades of brown, each representing a different branch of her family. Brown munched on Goldfish crackers while escorted across the stage by her father.

Before the show, Janice Hotch of Juneau showed off a reversible vest she had made for one of her granddaughters. One side of the vest was made with seal skin, once reversed, images from the story of Noah’s ark were sewn onto the vest. Nearby another of Janice’s granddaughters — 5-year-old Juliette Hotch — was getting ready in regalia mostly made by her mother.

From left to right, Saige Jack, with cousins Zayn and Blake Johnson, show off their regalia - a mix of Tlingit and Athabascan pieces - during the Toddler Regalia Review at Centennial Hall on Friday, June 10, 2022. (Peter Segall / Juneau Empire)

“She was in the last Celebration when it virtual a whole other thing when it’s on stage,” said Juliette’s mother, Jill Kaasteen.

Kaasteen said Juliette had recently graduated from a Lingít language emersion program, and she made a bib with a rainbow to celebrate the occasion. A vest and matching moccasins were made with seal skin, Kaasteen said.

“I learned how to sew and bead in middle and high school,” Kaasteen said. “Making mostly stuff for myself.”

Nearby, Bambi and Jessica Kinville-James readied their daughter, Cedar, 5, for her first regalia review. Each piece of Cedar’s outfit was made for her by a family member, Bambi Kinville-James said.

“Her aunty Carrie made her earrings and her skirt,” Kinville-James said. “Her apron was made by aunty Carole, cousin Bonnie made her vest.”

Cedar Kinville-James, 5, gets ready for the Toddler Regalia Review at Centennial Hall on Friday, June 10, 2022. All the pieces of Cedar’s regalia were made by family members, her mother, Bambi Kinville-James said. (Peter Segall / Juneau Empire)