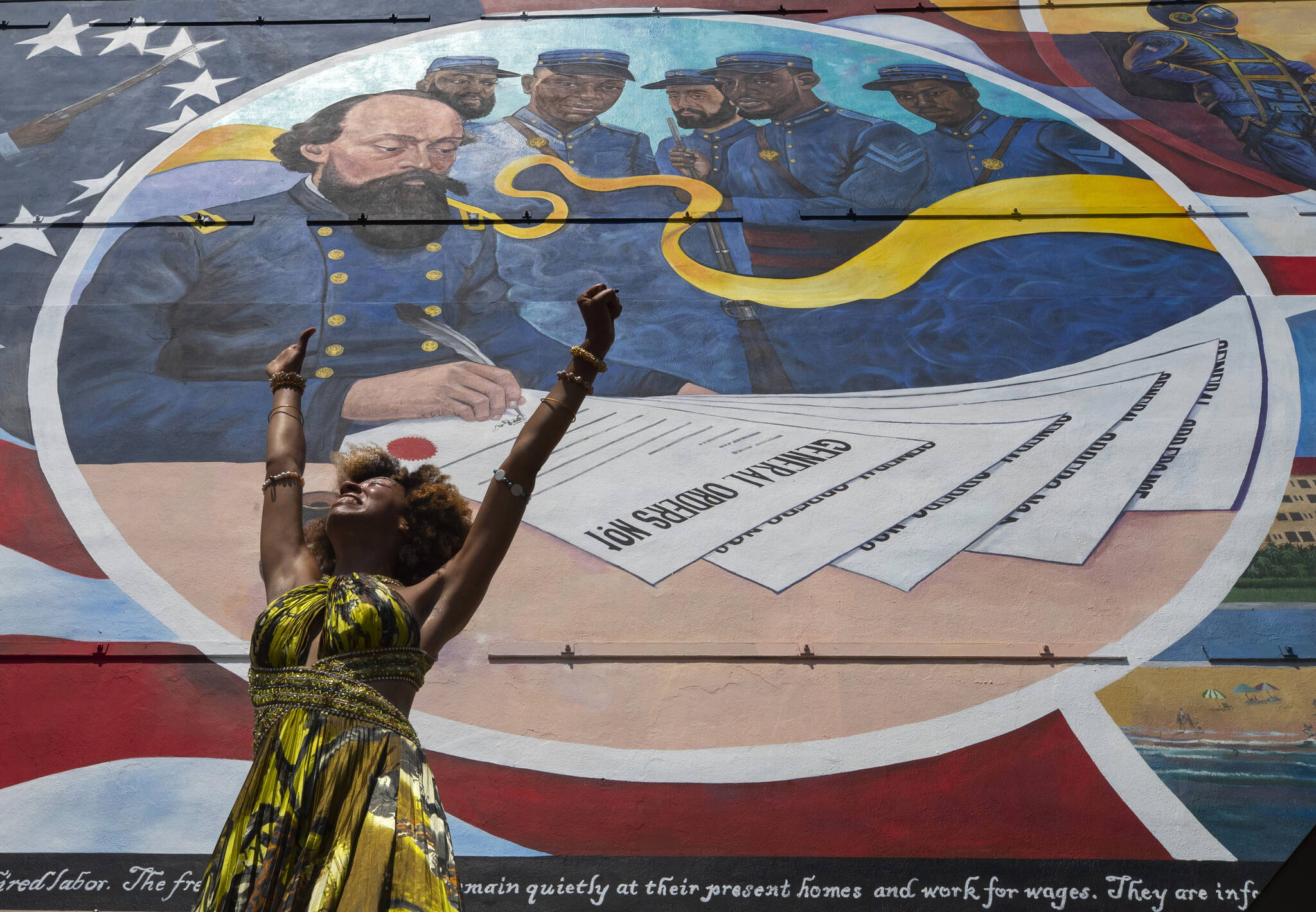 Dancer Prescylia Mae, of Houston, performs during a dedication ceremony for the mural “Absolute Equality” in downtown Galveston, Texas, on June 19, 2021. Recognition of Juneteenth, the effective end of slavery in the U.S., gained traction after the police killing of George Floyd in 2020. But after an initial burst of action, the movement to have it recognized as an official holiday in the states has largely stalled. (Stuart Villanueva / The Galveston County Daily News)

The Black Awareness Association of Juneau is celebrating Juneteenth this year with a fundraiser picnic at Twin Lakes Park on Sunday, June 19.

“We’re hoping for sunshine so everybody can come and have a good time,” said Sherry Patterson, head of the Juneau BAA.

The BAA has held Juneteenth events in the past Patterson said, but not since before the COVID-19 pandemic, and this is the first year the group has held an event since June 19 became recognized as a federal holiday.

“We couldn’t not do something for the community,” Patterson said.

Juneteenth is a celebration of the liberation of Black Americans from institutional slavery following the passage of the 13th Amendment to the U.S. Constitution in 1865. Celebrations for the holiday originated in Texas in 1866 and the state officially recognized the day in 1979.

Alaska recognized Juneteenth as a holiday in 2001, in a bill with co-sponsorship from Lisa Murkowski, at the time a Representative from Anchorage in the Alaska House of Representatives, as well as state Sen. Donny Olson, D-Golovin, who is still a member of the Alaska State Legislature.

“African Americans have been celebrating this holiday for years, especially in Texas,” Patterson said. “But for the nation to recognize it is significant.”

In addition to hot dogs, Coppa ice cream and sweet potato pies will be for sale, Patterson said, and the Northern Tea House will be serving boba tea. Proceeds from the fundraiser will go to the Black Excellence Scholarship Fund, Patterson said.

Downtown shop Annie Kaill’s will donate 10% of their sales from Sunday to the fundraiser, according to the Juneau BAA.

This year Juneteenth is the same day as Father’s Day, and Patterson said the picnic will run from 11 a.m.-3 p.m. to give people time for other events that day, including Gold Rush Days.

Patterson said speakers are still being arranged, but the picnic will contain an educational component about Juneteenth.

In 2021, President Joe Biden signed the Juneteenth National Independence Day Act officially designation June 19, as a federal holiday. That bill was passed unanimously in the U.S. Senate and received only 14 nays in the U.S. House of Representatives, all Republican, though the late Don Young was not among them.

Juneteenth celebrations found renewed focus during the civil rights movement of the mid-20th century, according to a Harvard historian Henry Louis Gates Jr.

“As is well-known, Martin Luther King Jr. had been planning a return to the site of his famous ‘I Have a Dream’ speech in Washington, this time to lead a Poor People’s March emphasizing nagging class inequalities,” Gates wrote for the website the Root. “Following his assassination, it was left to others to carry out the plan, among them his best friend, the Rev. Ralph Abernathy, and his widow, Coretta Scott King. When it became clear that the Poor People’s March was falling short of its goals, the organizers decided to cut it short on June 19, 1968, well aware that it was now just over a century since the first Juneteenth celebration in Texas.”

Former state rep accused of voter misconduct will have a trial in August.