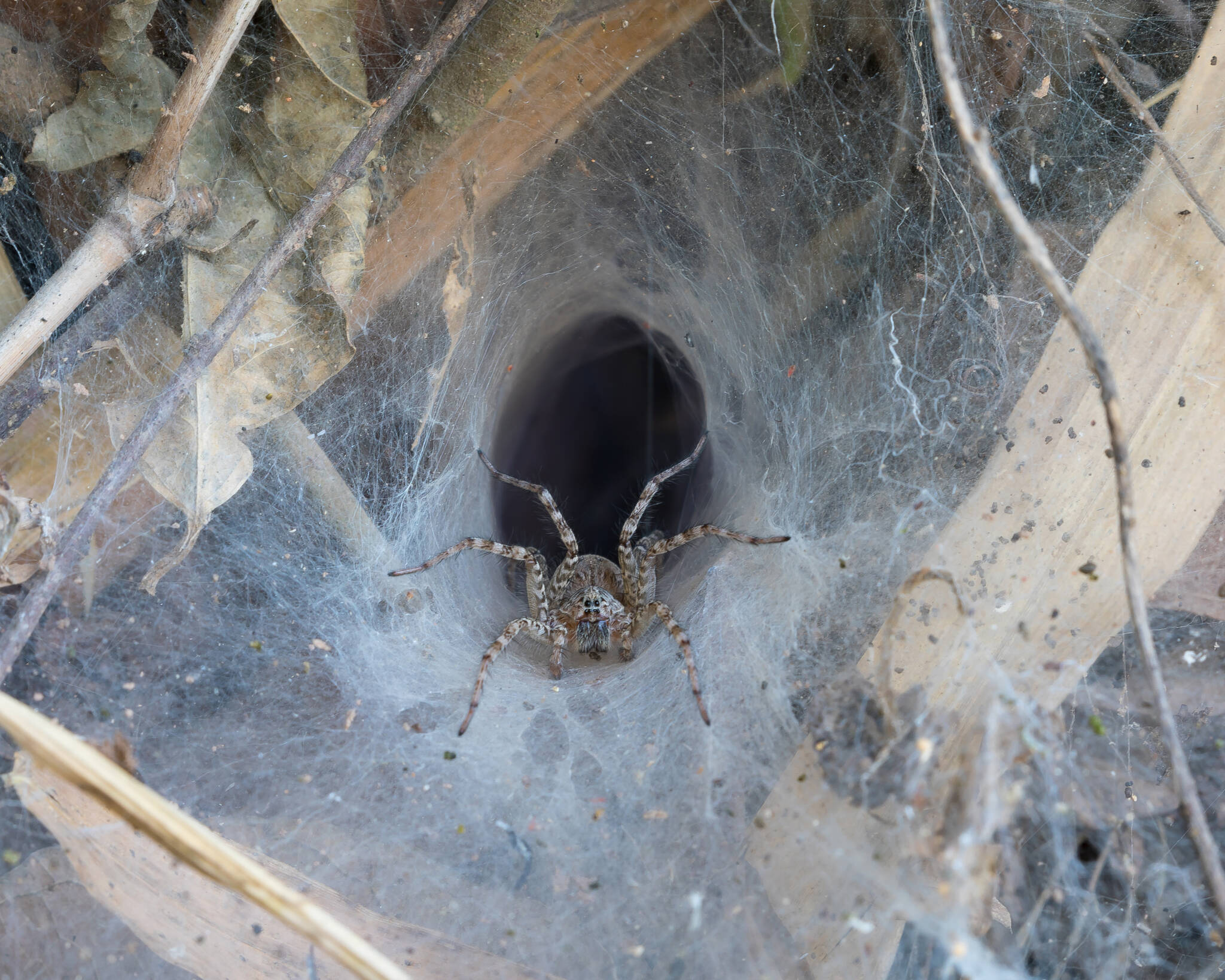 This photo available under a Creative Commons license shows a lawn wolf spider in its funnel web in Laos. (Courtesy Photo / Basile Morin)

All spiders can produce silk, in some cases using it for bridging between twigs, or ballooning away while dispersing, or wrapping up a cluster of eggs. Many (but not all) spiders use silk for capturing prey.

There are wonderfully diverse ways of using silk to detect and capture prey. Without worrying about the several varieties of silk or the taxonomic details or how all the methods may have evolved, I found it fascinating just to consider the array of arrangements by which spiders use silk for getting dinner. Here is a sample.

Most web-builders are sit-and-wait predators, constructing the web and then lurking nearby, to rush out when the web is disturbed by an insect. Orb webs, usually stretched vertically across an opening in the vegetation or across a trail, are familiar to all of us—the classical sticky spiral on an open-weave network supported on a frame of radial support lines.

A variation on this theme is provided by lampshade spiders, which suspend a three-dimensional web from an overhang. Constructed of rather open-weaving, with sticky capture threads, the web is pulled taut by threads extending from the bottom of the shade to a support, creating the shape. The shape of the web provides some protection for the spider, while it awaits the twitching of the web that signals a capture.

Another three-dimensional kind of web is constructed in two parts; it’s called a bowl-and-doily web. A bowl-shaped, densely-woven sheet web is suspended above a flat, horizontal web; numerous tangle lines extend from the supporting frame down into the bowl. The spider sits upside down under the bowl, protected by the flat web below it, and waits for prey to encounter the tangle lines and fall into the bowl. Then it chews through the bottom of the bowl to grab the prey.

Other spiders use densely woven sheets to line a burrow, but the purse-web spiders take this another step: they start with a silk-lined burrow, but then extend their burrow as a silken tube lying on the ground or against a tree trunk. Then they hide in the tube, waiting for an insect to land, when they dash through the tube until they are underneath the prey and grab it with large fangs, cutting a slit in the tube to drag the victim in. The silken tube functions to detect prey (and protect the spider), but it does not contribute to capture.

Funnel-web spiders build silken tubes under rocks or in crevices of rock or thick tree bark. In front of this retreat, trip lines extend, sending a signal when a likely prey approaches. These Australian spiders are famous for their venom. They are not the same as the funnel weaver spiders, which are wide-spread across the world (and sometimes confusingly called funnel-web spiders too). Funnel weavers hide in a silken, funnel-shaped retreat; a thick silk sheet lies like a doormat lies in front of the funnel; this not only announces the arrival of prey but the mat surface is springy and full of entangling filaments that also slow down a walking prey animal, making it easier to capture.

Tangle-webs are small but complex, constructed of many little strands of silk oriented every-which-way. We usually call them cobwebs, finding them in untended corners of the house, but they also occur out in the vegetation. The messy arrangement of the strands offers good protection for the owner of the web—notably against predatory wasps. There are many kinds of tangle-web spiders, each building its own kind of tangle. Some of these add an unusual booby-trap: they build the web some place that provides a ceiling and a floor (e.g., between a rock and the ground, or the shelves of a little-used bookcase). From the web they drop a sturdy silk line to the floor and glue the end of the line there; then the spider goes back up to the web, coating the line with glue and pulling it taut, so the line is under tension. A single web may have several of these ‘gum-foot’ lines. Woe betide the hapless bug that wanders into one of these lines—it gets stuck in the glue, and its struggles loosen the attachment of the gum-foot to the floor, releasing the tension so the springy line hoicks the victim up to the web where the spider waits.

Some spiders actively tend their webs. Triangle-web spiders make a two-dimensional web that looks a bit like part of an orb web, with one end tapering down to an anchor line. The spider hangs out at the end of the anchor line and pulls the line taut. When an insect hits the web, the spider lets go, releasing the tension, and the net-like web collapses around the wriggling prey. If the prey continues to struggle, the spider again pulls the anchor line tight and releases it again, maybe several times, getting the prey well entangled in capture strands. Ray spiders do something similar: they build an orb-like web but pull it into a cone shape, releasing the tension when a prey ventures into the cone, so the prey is then whacked with sticky web.

A few spiders have forsaken traditional webs—they make portable silk weapons! Gladiator spiders (so-named for one of the techniques used by Roman gladiators) make a tiny, sticky net and hold it in their front four legs. When a bug approaches, the spider stretches the net open and sweeps it around the prey, wrapping it well before chomping down with their fangs. Bolas spiders attract certain kinds of male moths by emitting an odor of female moth; the wings of an approaching male signal the spider’s sensory bristles. The spider is prepared, with a single silk line that has a sticky blob at the end. The spider swings the bola like a Patagonian gaucho, round and round, until the blob hits the bug and spider can reel it in.

A close look at spiders and their silk gives us yet another display of the endless ingenuity of evolution!