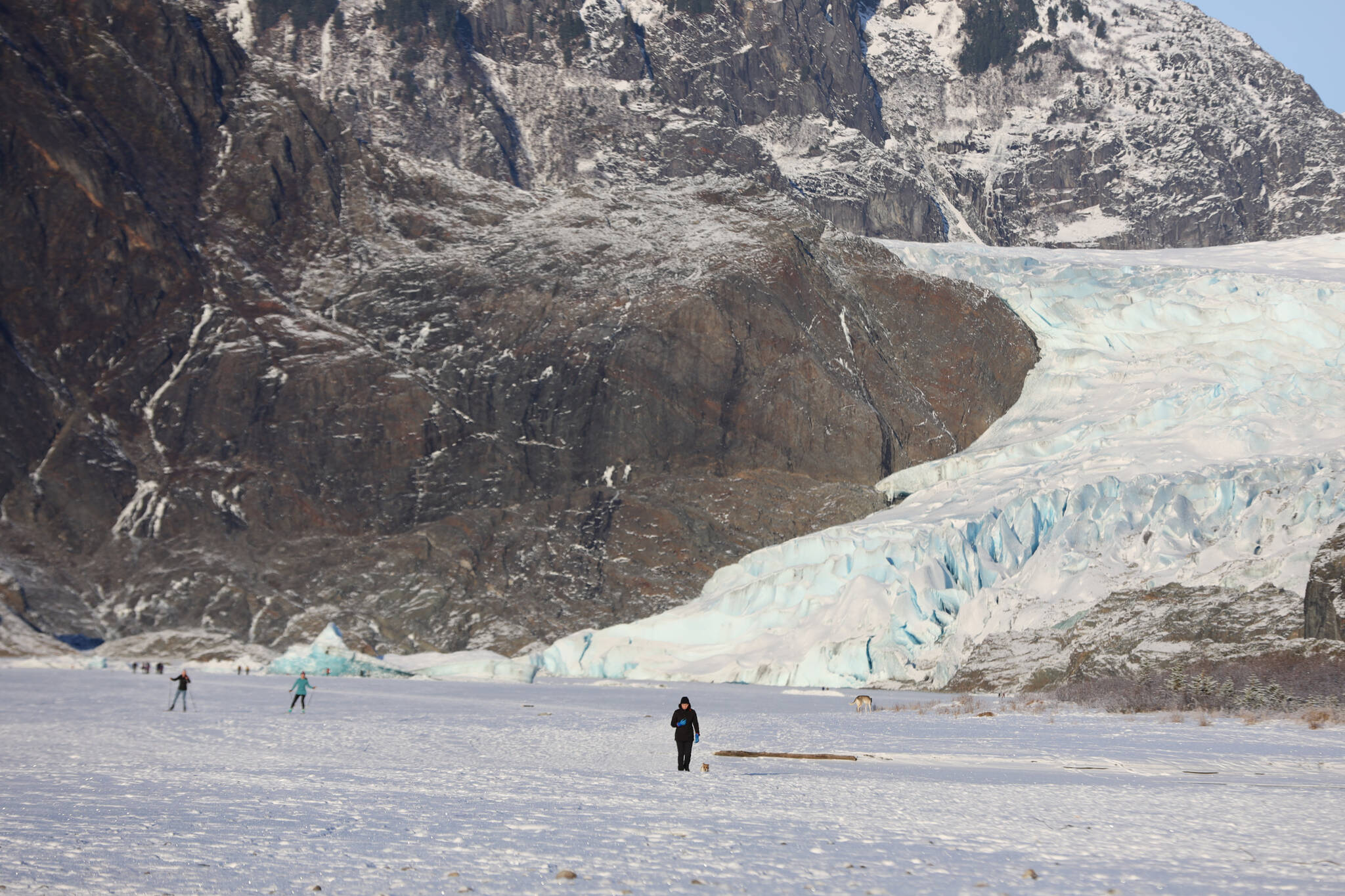 People and dogs traverse the frozen surface Mendenhall Lake on Monday afternoon. Officials said going on to any part of Mendenhall Lake can open up serious risks for falling into the freezing waters. (Clarise Larson / Juneau Empire)

Though the Mendenhall Glacier may look like a winter wonderland from afar, according to officials, crossing the Mendenhall Lake ice to view the glacier up close is extremely dangerous and recommend residents steer clear.

“We always say that there is no safe ice anywhere,” said Jayme Johns, captain and rope and water rescue team leader for Capital City Fire/Rescue. “We can’t stop anybody from going out there but getting out there is very, very dangerous.”

Johns said that though some locals conduct tests to gauge the lake’s thickness, there is no way to know for certain that all ice is the same as the area tested, and it can vary drastically.

Brian Weed, the account runner for Juneau’s Hidden History Facebook page, went out on the lake Monday and throughout the afternoon he drilled more than 40 holes in the ice on the east side of the lake in an effort to give some insight to residents on general ice thickness. Weed said each winter he drills the lake around 3-4 times and has done so as a form of public service for around five years. This time around, he said the average thickness was around six inches.

Brian Weed drills a hole on Mendenhall lake Monday morning. Weed said each winter he drills the lake around 3-4 times and has done so as a form of public service for around five years. This time around he said the average thickness was around six inches. (Courtesy / Brian Weed)

“I do it so people can make their own decisions on safety rather than hear ‘yes it’s safe’ or ‘no it’s not safe,’” he said. “It just gets more information out there so people can make a decision on whether they want to risk going out on the ice.”

Weed said during the day on Monday he could see water near the face of the glacier, and noted that by around 1,000 feet from it the ice started to thin out rapidly.

This photo is a screenshot of GPS points where Brian Weed drilled holes at on Mendenhall Lake Monday morning. He noted that some look like they are in the glacier, however, he said they are not and it is due to the map being outdated and the glacier receeding. (Courtesy / Brian Weed)

“I never say that it’s safe — I just say ‘this is the information I have collected’ and it’s always changing so it’s just mean to give some people a little peace of mind if they have no idea how thick the ice is — people can use it or not,” he said.

According to Johns, going on to any part of Mendenhall Lake — or any other open water in Juneau — can open up serious risks for falling into the freezing waters and said the situation is likely to happen the closer a person gets to the face of the glacier.

In early 2022, it was reported that CCFR assisted a man who was partially submerged in the lake after going through the ice near the Mendenhall Glacier. The man reportedly suffered minimal injuries, however, Johns noted that’s not always the outcome.

“That’s the worst thing that could happen if you fall in and get pulled under,” he said.

According to Brian Bezenek, lead meteorologist at the National Weather Service Juneau, if a person is uncertain of the thickness of ice, the safest course of action is to stay off the ice. However, there are also steps people can take to minimize risk.

Both Johns and Bezenek said if people choose to go out on the lake at this time, they recommend people stay near shore and on previously used tracks, and stay away from the face of the glacier, Nugget Falls and any open or flowing water.

In a recent Facebook post by NWS Juneau, it reminded residents that there is no safe distance from the glacier, but coming in less than around 300 yards of it greatly elevates risks. It also noted residents should stay from the four stream mouths of the lake, especially Nugget Creek, and to avoid icebergs.

“Any water flowing underneath the ice has the tendency to reduce thickness,” Bezenek said.

Bezenek said the area near the face of the glacier is particularly dangerous because it is constantly moving and calving, meaning at any moment large pieces of ice could shift or break off and disrupt the ice on the lake. He said the receding glacier — which will likely mostly vanish from view of the visitor center by 2050, according to a Juneau-specific climate report — does has an impact on the lake’s winter safety as well, but noted calving is a more immediate risk.

“We have no idea when that’s going to happen,” he said. “It can have a tendency to drop off tons of ice and even make a wave under the ice that could make it unstable.”

Bezenek and Johns said it’s essential that people pay attention to what’s going on around them and look for any cracks or open water ahead of them. They said if people plan to go on the ice with a group, they recommend the group members spread out and not concentrate their weight in any one given area, and if bringing dogs or other animals on the lake, they recommend they remain on leash or stay near the owner.

Before people go out on the ice, they recommend letting someone know the time they plan to be out on the ice and, and note it’s a good idea to bring a rope or throw bag along with a dry bag to put cellphones in.

What to do if a person falls in

If someone finds themselves falling through the ice and into the water, Johns said he has several tips to take to attempt a self-rescue.

If a person sees someone else fall into the water, Johns recommended first calling 911 to get the ball rolling and said the would-be rescuer should stay at least 20 feet back before throwing a rope or going into a belly crawl to get as close as they can to the person while still distributing their weight across their body.

He said to remain calm and use as much strength as possible to pull the person out while still not getting too close to the hole.

“If your partner falls in, don’t just walk up and try to help them,” he said. “The worst thing that could happen is that they pull you in with them and you’re both stuck.”

If someone finds themselves in the water alone, he again said it’s important to remain calm and focused on the situation and the goal of getting to safety.

“First minute of break, you need to calm yourself down as best you can and work to get out of the hole as quickly as possible,” he said.

Johns also noted the use of limbs will only likely last for 10 to 15 minutes in the cold water before a person loses mobility.

He said it’s important that the person orient themselves in the direction that they came from because the ice they previously walked on is more likely to hold their weight again.

Once situated in the right direction, he said the person should do their best to raise their arms and chest as high as possible before kicking strongly and forcefully to push their chest and arms on the ice again.

Once up and out, Johns emphasized that the person resists the urge to stand up because that could potentially cause another break.

“It’s hard, but Resist the urge to stand up and instead roll out or army crawl out,” he said.

After that, and once the person is away from the hole, he said the person needs to follow the path they came to as efficiently as possible to find help or get to a place where they can warm up their body as hypothermia will likely begin to kick in.