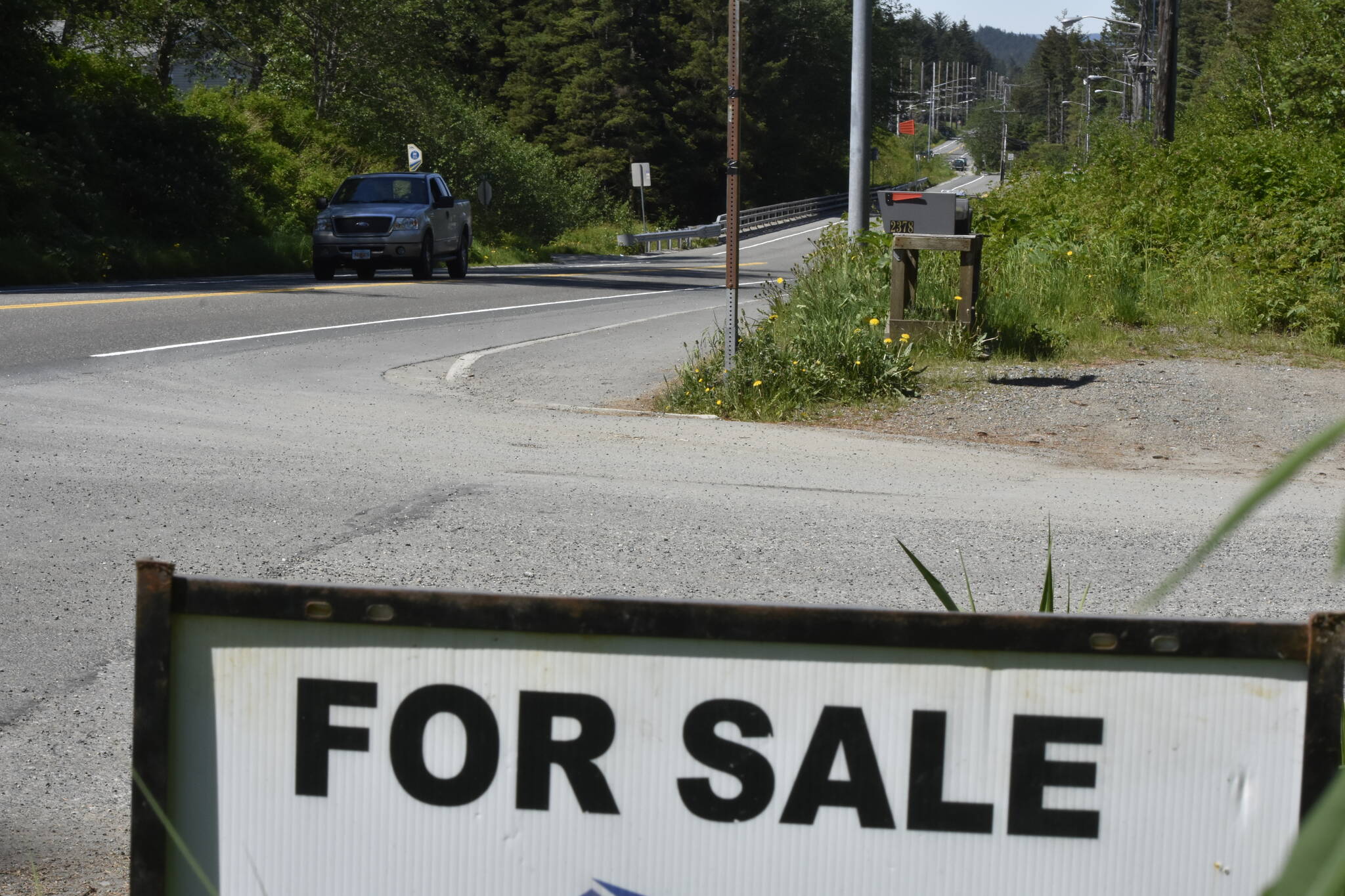 A sign on the Douglas Highway advertises a home for sale on Thursday, June 2, 2022. Home prices in Alaska have been increasing for the past two years but an expected increase to interest rates might cool off the market. (Peter Segall / Juneau Empire)

The Alaska Housing Finance Corporation is sending out grants to homeowners struggling with expenses caused by the COVID-19 pandemic as the state’s housing market continues to tighten.

In a news release, AHFC said it was working on distributing $50 million in federal relief funds to qualified homeowners who are struggling to pay bills due to pandemic disruptions. Eligible homeowners can receive funds for past or upcoming mortgage or utility payments, totaling up to $40,000 per household, according to AHFC. There are a number of avenues through which homeowners can receive money, said Stacey Barnes, AHFC’s director of governmental relations and public affairs, and there is still verification work to be done, she said, but nearly 11,000 households have applied.

“There are a number of Alaskans who no longer have a mortgage on their home, but who were still impacted by COVID,” Barnes said in an interview with the Empire. “That’s where the utility payments come in.”

According to AHFC, of the 10,979 applications submitted during the March 14-April 4 filing period and through subsequent appeals, 2,384 applicants said they were past due on their mortgage; 1,516 said they were at risk of foreclosure; 1,488 said they were in forbearance for an average of nine months.

All of the funds for the relief program are federal, according to Barnes, who said the American Rescue Plan Act allocated $9.9 billion nationally for the program. How much states received was based on population, Barnes said, and as one of the smaller states population-wise, Alaska received the minimum amount of $50 million.

But as some homeowners are struggling to make mortgage payments, home prices in the state have increased over the past two years. But an expected increase to interest rates might cool off Alaska’s housing market, according to Rob Kreiger, an economist with the Department of Labor and Workforce Development.

Though still at historical lows interest rates are expected to increase soon to adjust for inflation, Kreiger told the Empire, and when rates do change it’s hard to predict how that will impact Alaska’s housing market.

“What we’ve seen recently is (low-interest rates) allow people to borrow more,” Kreiger said. “And even though prices are high it makes monthly payments more manageable.”

Rates are expected to increase but it’s not clear by how much, Kreiger said, and when they do rise it’s hard to say at what point interest rates discourage people from borrowing to buy a home. In a recent article for Trends, a monthly publication of DOLWD, Kreiger wrote the price of home sales in Alaska continued to grow even through the pandemic in 2020 and 2021 and increased 9% during that time.

A limited number of homes for sale and many interested buyers pushed the price of an average single-family home in Alaska up to $388,648 last year, Kreiger said, the third-largest percent increase in almost 30 years. The record is 10.1% in 2005.

With low interest rates and manageable mortgage payments, an increase in the price of homes is still viewed as affordable by DOLWD, Kreiger said, but as interest rates rise it’s not clear how long that will remain the case.